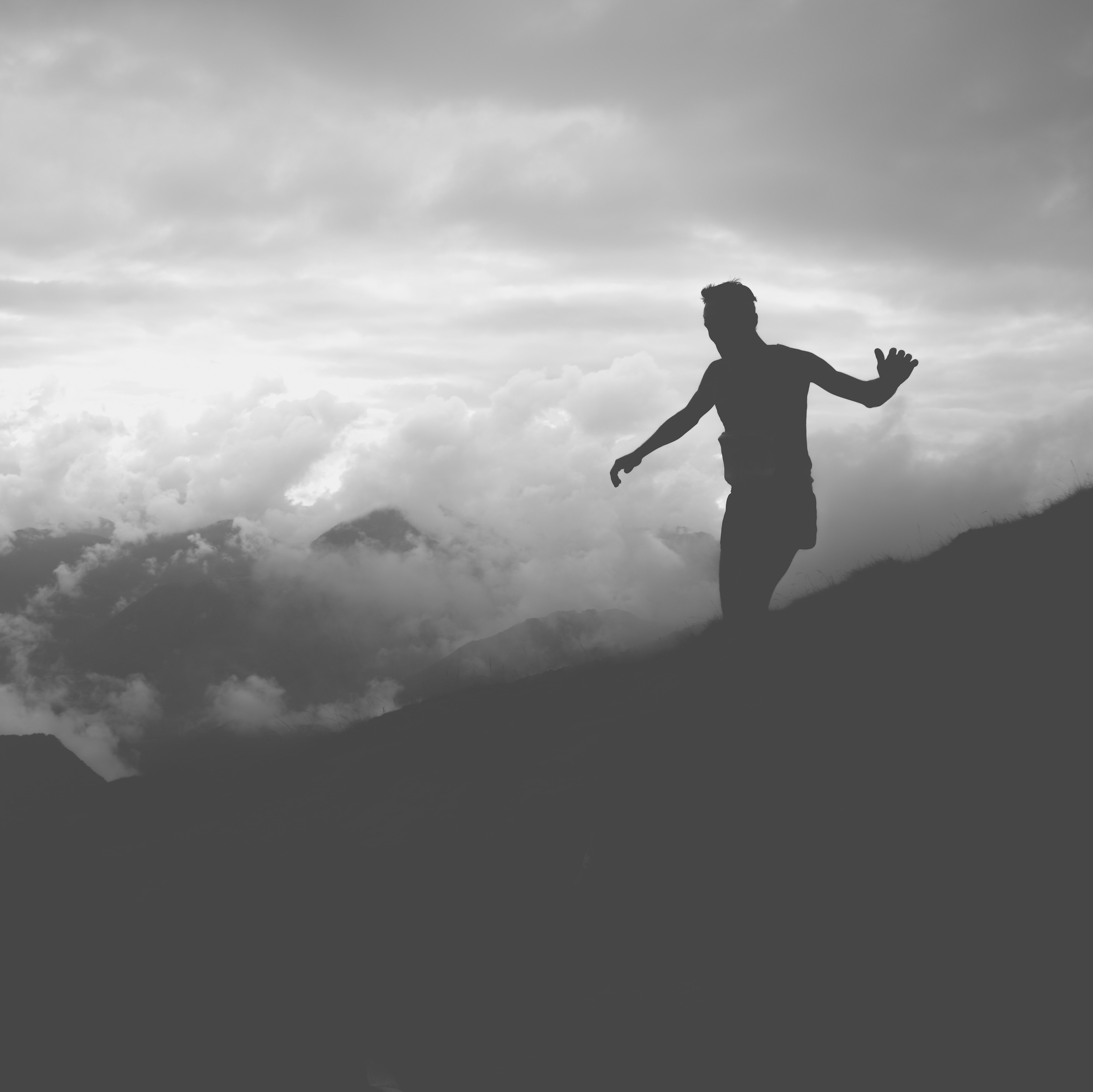 Curly Maple and Sapele Side Table

I made a side table out of curly maple and sapele with my father. 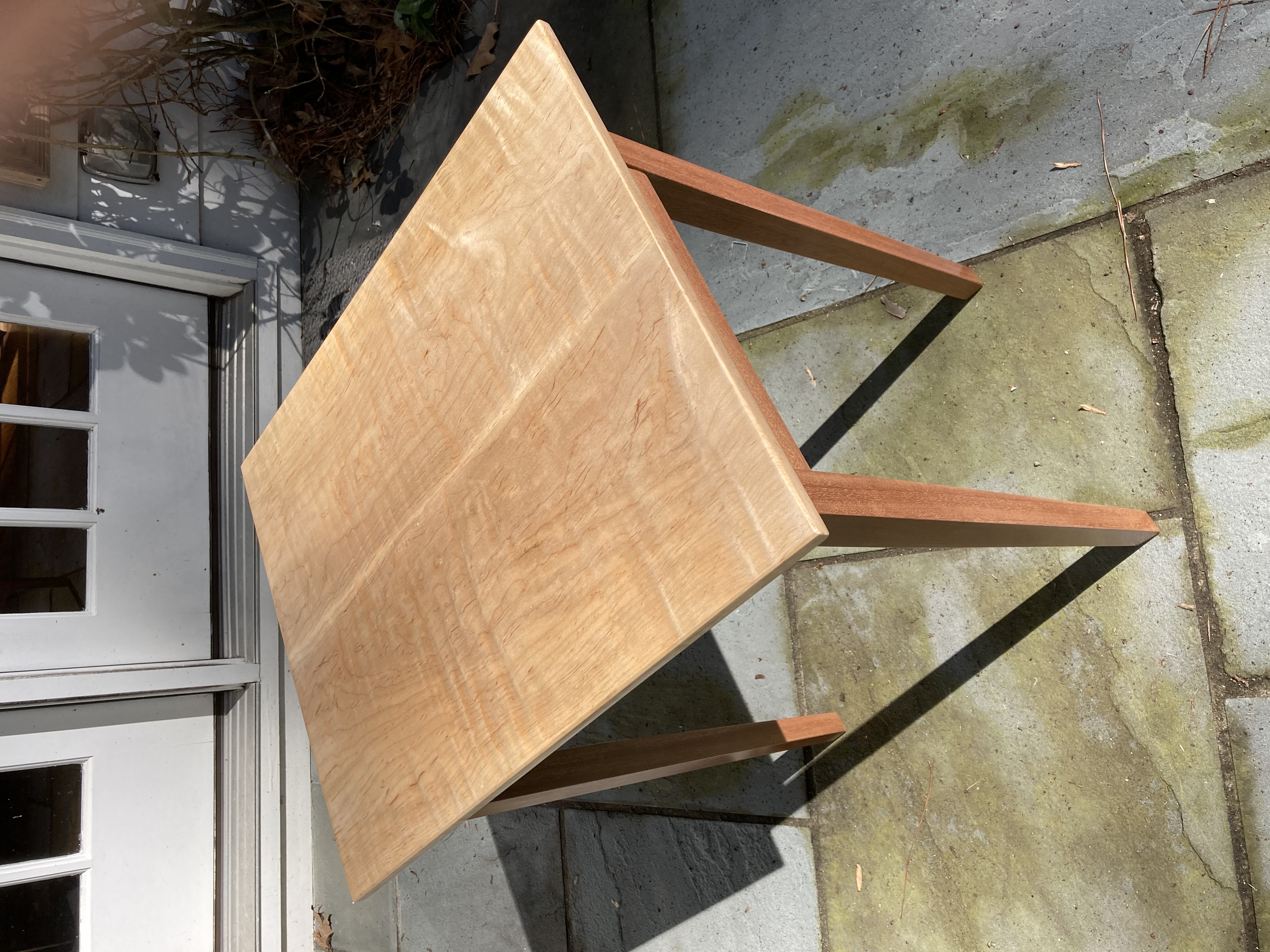 My dad has been asking me to make him something since I got into woodworking. While he was in town recently, and since it overlapped with his birthday, I offered to make a table with him instead of just for him.

We started by visiting a local woodworking supply store that had various interesting woods and exotics. Dad picked out a beautiful curly maple for the top, and we matched it with sapele for the base. I’d never heard of sapele before. It turns out to be similar to mahogany but with wavy, multi-directional grain patterns that create a striped effect. Look for the alternating bands of red-ish and gold-ish color on the base. (Since the grain legitimately changes direction for those color stripes, it was very interesting to work with.) 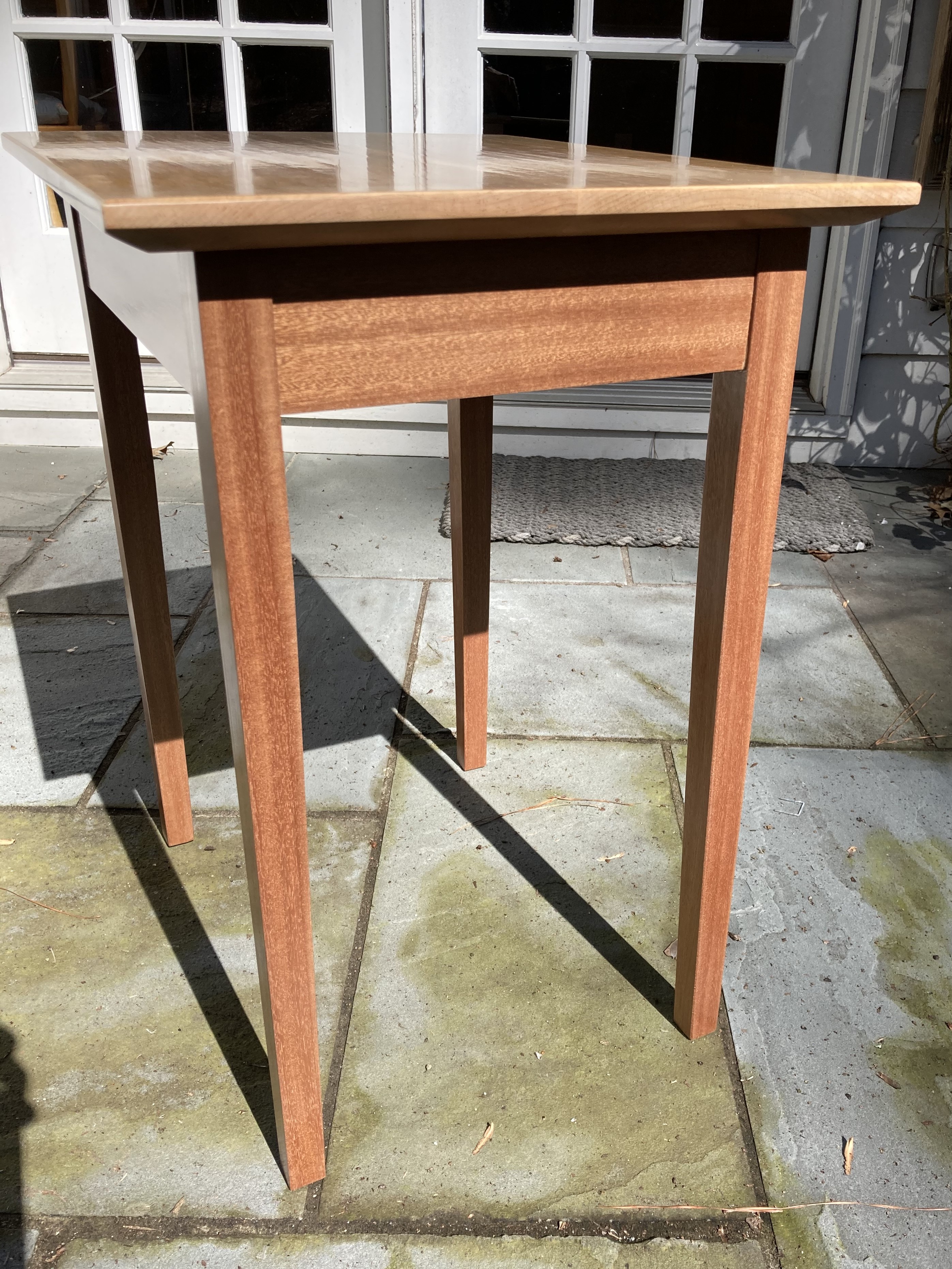 We spent a long time picking the most dynamic sections of curly maple to match together for the table top. I’ve never spent so long trying to make a perfectly clean seam while edge-joining those two boards. 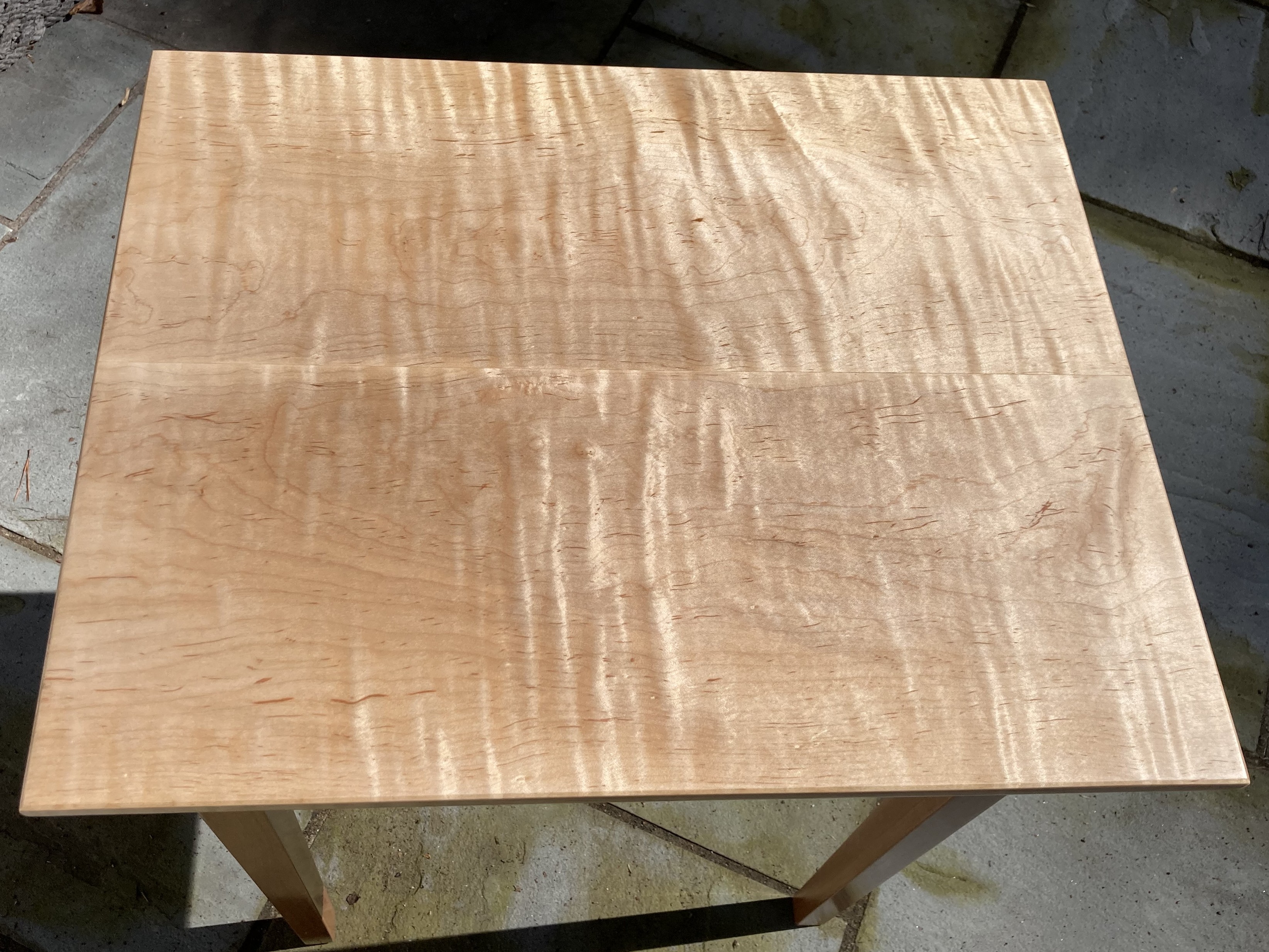 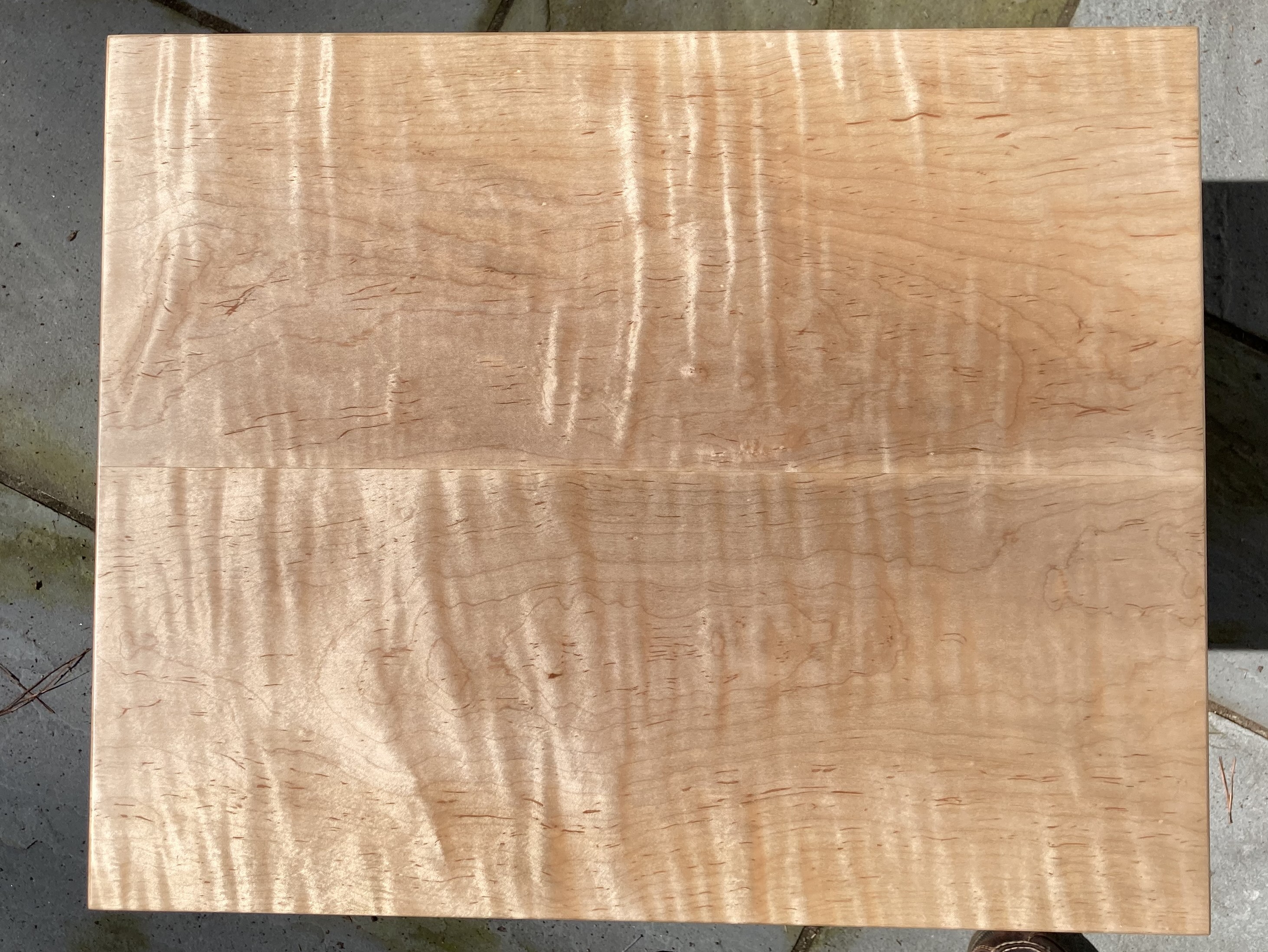 Here’s the table in its final home. 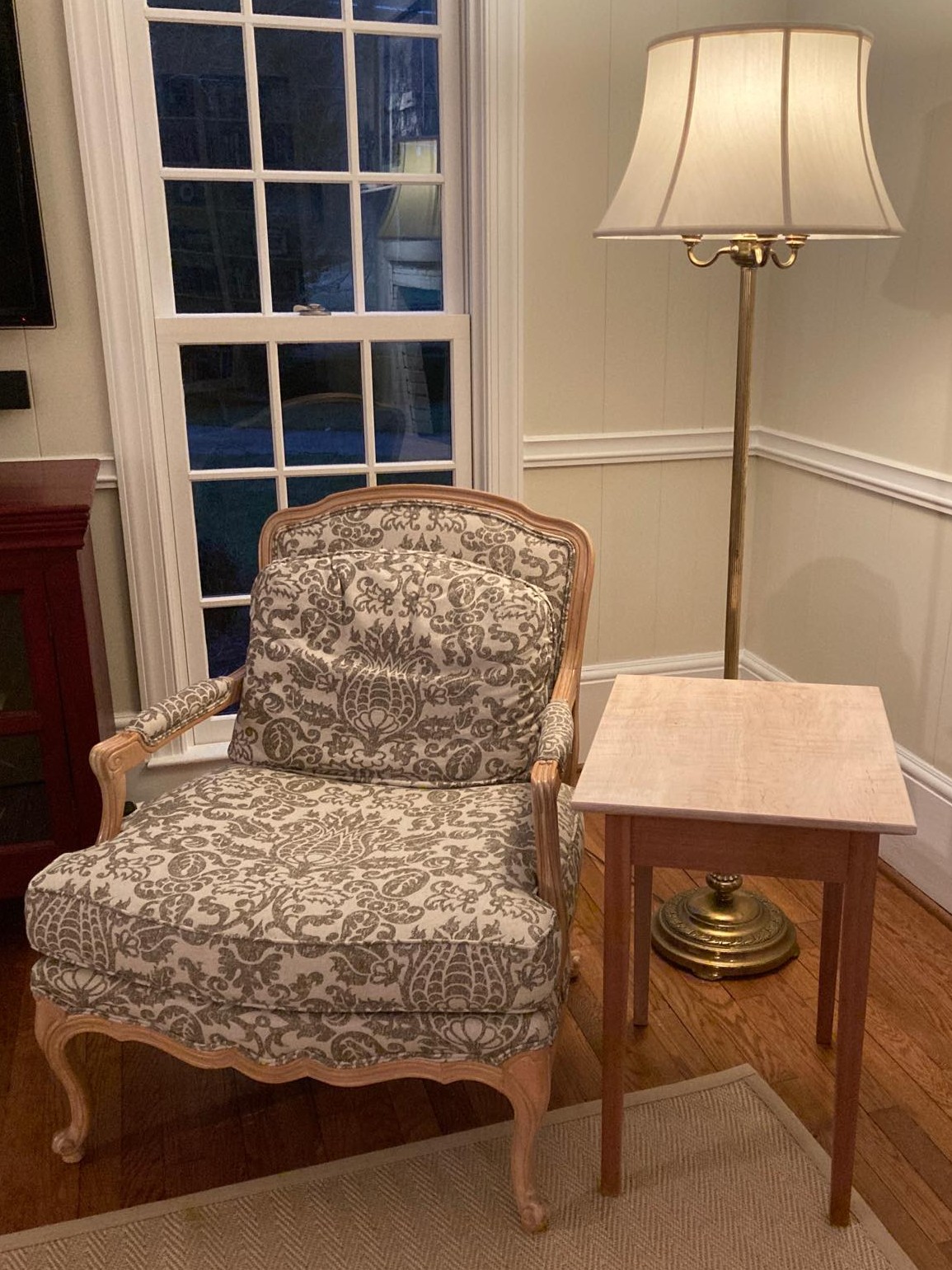 I still have some of the curly maple and sapele left over, so I’ll probably make myself a similar table at some point.

Dad did the final finishing. (We ran out of time during the visit.) Neither he nor I had worked with shellac before, so I was glad he took the time to figure it out and document it. Here are all of his notes if you want the details. They might be helpful for anyone else planning to try shellac.

For the curly maple top, I used Zinsser Bulls Eye SealCoat Universal Sanding Sealer 100% Wax-Free Shellac. The online research I did says this type leaves the color of the wood more “natural” than the regular shellacs that Zinsser offers that have color in them and that have some wax. Apparently being “wax-free” is important too, though I’m not sure why that is true. In any case, this shellac has been bleached out so it has very little color. It gives only a little color to the maple, roughly similar to wetting it with water, but it does not make the maple yellow, amber, or brown. I wanted to keep the maple looking “natural,” and I’m entirely satisfied with the result of this finish.

I had never worked with shellac before. It was very different than the varnish I was accustomed to applying. I had some false starts trying to figure out what to do, and I made some mistakes that I had to fix along the way. But eventually I got it reasonably well.

The big thing to be aware of is that the shellac is alcohol-based, and the alcohol dries very, very fast. The shellac straight out of the can seems pretty thin, compared to the water-based finish or to varnish. However, because the alcohol solvent dries so very quickly, you have to thin it some more with denatured alcohol in order to have any decent chance of getting a smooth coat. If you get it properly thinned, and don’t try to keep brushing it after the first 15 seconds or so, it’s easy and quick to apply. But if it is not thin enough, it will not “level” when you apply it. Instead, it will dry so fast that any little “wave” on either side of your brush stroke (like a boat wake, for example) will just gel in place and dry into a ridge. Back when I was using varnish to refinish my boat companionway boards, I had about 1 or 2 minutes to spread out the varnish with the brush and smooth out brush strokes. With shellac, even if you thin it properly, you only have about 15 or 20 seconds, then it starts to become gummy and re-stroking just makes a mess.

Here are my conclusions and recommendations from the experience.

Get a small glass jar with a screw-top to mix a small amount of shellac and denatured alcohol to the desired consistency; you need a tight-fitting lid to get a good seal to keep your mixed shellac from evaporating between coats.

Use disposable gloves. The shellac makes your hands sticky immediately.

Plan for thinning the shellac. The mix for the first two coats should be at a ratio of about 2:1 (2/3 shellac and 1/3 denatured alcohol). Those coats will soak into the wood and be the base. For the third and subsequent coat(s), a ratio of 3:1 or 4:1 (shellac to alcohol) ought to be fine. But if you find the shellac gets gummy too quick to “level” and for overlapping strokes to blend while both are still wet, then just thin it somewhat more. There is no penalty for being a little too thin.

Brush vs. pad. To do the large flat surfaces on the top and bottom, I used a china bristle brush (same one I had used to varnish). But to do the edges and bevels, I used a “pad.” Make the pad by getting a square of old t-shirt about 8” or so, then wad up some other t-shirt in a ball and wrap the square around it and tie or rubber-band it so you end up a perfectly-smooth t-shirt surface on the end of the ball. Flatten that end, then that’s your pad. You hold it by the “tail.” To use, dip the flattened end of the ball in your shellac. Get it reasonably saturated, but wipe it off on the lip of the jar so it does not drip. Some websites suggest using the pad to shellac the large flat surfaces, but I never could control the flow properly, so I used a brush on the top and bottom. But the pad worked great on the edges and bevels.

Brush method: Here is what worked for me:

First, standing on one side of the surface to be shellacked, position a bright lamp on the opposite side so that you can see light reflected across each new stripe to confirm that it is uniformly “wet,” and to help you properly overlap each stripe of shellac and not leave any dry spots.

Dip the brush into your mix, wipe the excess on the lip of the jar but keep it fairly wet, then do a stripe brush-width, with the grain, starting along the far side of the surface (opposite where you are standing). Start the stroke by sweeping down to contact the surface about 4 or 5 inches in from the left end and then make a sweeping stroke to the right end off the edge, then immediately do the second sweeping stroke back from right to left (start about 4-5 inches in) and sweep off the left end, then immediately do a third stroke starting almost at the left end and sweep off the right end. Make sure your stripe covers the surface to the edge on the opposite side from you. That’s all for that first stripe – don’t go back and try to “work” it. Without stopping, repeat the same 3-stroke process to make the next stripe, overlapping the first stripe by about 1/3 or so. Then repeat. Keep up a steady pace so that each overlapping stripe blends with the previous stripe while it is still wet, before it starts to turn gummy. Continue that way, working toward yourself, until you reach the near side of the flat surface. Make sure your last stripe covers all the way out to the edge of the top nearest you.

For the first 2 coats, use the 2:1 ratio. Brush that liberally on the bare wood, it will soak in. After the first coat, sand any obvious high spots or ridges smooth with 400 grit (not 220), and then very lightly sand across the whole surface with 400 (2 or 3 passes at most, just to scuff a bit). Then do another coat the same way, with the same mix, to establish a good base.

When I was ready to start applying, I did the bottom first. It is rough, so I was just looking for a sealer coat. I did about 3 coats, sanding lightly with 400 grit between each coat. I did the bevels at the same time, but paid closer attention to getting those right because they show. I used a small rag wet with alcohol (but don’t let it drip) to wipe the thin edges to try to catch any runs.

After I did the bottom and the bevels, I flipped it over and did the top. I tried to be more careful and precise, but in my early coats I made mistakes. I did not thin the shellac enough, I used too much, and I tried to keep brushing after it started to get gummy. As a result, I had to sand more to get rid of ridges and messy spots on the surface. Once I thinned the mix, it worked fine, and I started the “stripe” method described above.

Between the first 2 or 3 coats on the top, I used 400 sandpaper lightly to smooth out any ridges or messy spots. I learned that I should not use steel wool until there is a good covering of shellac. I made the mistake of rubbing the steel wool enough to come into contact the wood; the steel wool left a gray residue in the grain of the wood, so that I had to sand out that area and re-shellac it. I did not use steel wool again until there was a good base of shellac, and then I tried to be careful not to press too hard.

One other caution: do not let any denatured alcohol drip onto the shellacked surface. I did once, and it immediately melted a circle the size of a quarter that was visible in the shellac. I had to sand that spot out and re-coat that area.

Once I got the “stripe” method down, I did maybe 4 or 5 of those coats. Maybe more, I was not counting, and I was not sure when it was safe to quit. Each coat took no time at all. And if I did one in the morning, I could do another in the evening. (I did not try to do any more often.)

When I got to the point that the surface was about half shiny and half with just a little “grain” pattern where the shellac had settled but still seemed to be a good coat, I decided to see whether I had enough to smooth it with steel wool and rub it with a dry cloth to get the final surface. First I steel-wooled the parts with a little grain on the surface, to see whether there was enough shellac to make a good coat. Those spots smoothed out nicely and rubbed up well (with an old t-shirt). So that told me I didn’t need any more coats. I went over the whole thing with 0000 steel wool, gently, until I had cut all the glaze and everything was smooth. Then I rubbed the surface hard with a dry t-shirt to polish it up.

On the edges and bevels I found a few small runs, but I was able to scrape those down to level very gently with a box-cutter blade, then steel wool them smooth and polish with the dry cloth.